Anime and manga translation is unique in that the majority of translation is conversational, but the type of conversational Japanese can vary depending on subject and character. A straight-laced secretary will speak very differently from an energetic young girl from Osaka. Conveying these in a natural way that is true to the source is very important for Western audiences.

Naoe-kun, a massage therapist, is about to head home for the day when he’s saddled with a rather strange patient. This lovely lady has emerald eyes, pointy ears, and grew up in the forest–everything about her screams “elf,” except for one thing: her bodacious body. It turns out she left her world but loves junk food in this one, and now her obsession has caught up with her. Can Naoe-kun help this loveable elf girl lose the weight–and keep it off?

Suzuki Touru has just scored an amazingly cheap apartment–but the reason it’s so cheap is the front door opens up to a classic fantasy dungeon! Luckily, Touru has always wanted to explore a dungeon. But when he stumbles across Ria, a beautiful blonde knight, he may well have gotten more adventure than he bargained for!

Sakimori Kagami has woken up in the world of Arch Earth Online, a VRMMORPG he’s been playing intensely for a long time. The catch? He made some adjustments to his character when he last logged on, which he thought he hadn’t saved. Instead of his normal avatar of an old, bearded sorcerer, he’s in the body of a young woman! Now he must convince the people of this world that he–she–is a pupil of the wise man who vanished without a trace thirty years ago.

How Heavy Are the Dumbbells You Lift? (Vol. 1-3)
Translation by Wesley O’Donnell

Hibiki is a teenage girl who loves to eat, but when she notices her waistline expanding, she decides to check out the local gym. The gym is full of buff dudes…and Akemi, the student council president?! When Akemi tries to convince Hibiki to take up weight training, Hibiki resists–until she meets pretty boy trainer Machio. Now, Hibiki is willing to do whatever it takes to get fit!

When Kanako accidentally applies to work at an assassination agency, the timid office worker discovers that she has a knack for bumping people off. Will she ever earn the respect of Sakurai, her prickly and kinda hot co-worker–and why is she still having silly workplace problems when she’s employed with hitmen?! This full-color manga is dangerously funny! 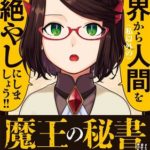 The Demon King is awake at last and hellbent on world domination—but first he needs a secretary. He finds a human to organize his devilish plot, and she’s perfect for the job. So perfect, in fact, that she’s steadily losing her grip on her humanity. Thanks to her smarts, super skills, and secretarial wiles, it’s only a matter of time before the Demon King’s destructive dreams come true!

After the defeat of the demon king, twelve adorable demons were born into the world. God orders Byron, a hero, to raise the little devils into paragons of virtue—for the sake of peace across the land. Now Byron must summon household powers and slay domestic chores in the life-or-death struggle of raising little kids!

Tomo-chan is a Girl!
Translation by Jennifer O’Donnell

Tomo and Jun have been best buds since they were little kids, but now that they’re in high school, Tomo wants to be more than friends…too bad Jun just sees her as ‘one of the guys.’ Tomo may be a tomboy, but she’s determined to prove to Jun that she’s a woman, too!

[Japanese volumes 5-6] Narumi Momose has had it rough: every boyfriend she’s had dumped her once they found out she was an otaku, so she’s gone to great lengths to hide it. When a chance meeting at her new job with childhood friend, fellow otaku, and now coworker Hirotaka Nifuji almost gets her secret outed at work, she comes up with a plan to make sure he never speaks up. But he comes up with a counter-proposal: why doesn’t she just date him instead? In love, there are no save points.

Sample from a cute book about learning Kansai-ben through a manga about 3 cats from the Kansai area.

The story follows Ani, a princess from the minor nation of Inako. Ani is sent to the signing ceremony that will bring peace to the rival nations of Mildonia, a mighty military country, and Selenfaren, a powerful theocracy. Ani is supposed to help steer the signing ceremony along, but she runs into trouble when she encounters a handful of obstinate princes.

In the decade since the world became aware of the existence of magic, the world has undergone a massive upheaval. However, a boy named Touta lives in seclusion in a rural town far removed from these changes. His ordinary life is highlighted by his magic-using female teacher and his supportive friends. When his tranquil daily life is disrupted, he embarks on a unique adventure.

In A.D. 2031, humans are enjoying a prosperous existence until strange life forms called Hardians appear. They suddenly begin to multiply and assault the human population. As a countermeasure, mankind organizes the N.I.D.F. to investigate the Hardians and protect themselves.

A fighter pilot, Aiba Shu, begins to become involved in the battle against the lifeforms. Rurika Yuno, one of Earth’s foremost scientists, investigates the Hardians and hears rumors about the “Book of a Dead Man.” What is the secret of this tome, and what relation does it have to the Hardians?

Sakimori Kagami has woken up in the world of Arch Earth Online, a VRMMORPG he’s been playing intensely for a long time. The catch? He made some adjustments to his character when he last logged on, which he thought he hadn’t saved. Instead of his normal avatar of an old, bearded sorcerer, he’s in the body of a young woman! Now he must convince the people of this world that he–she–is a pupil of the wise man who vanished without a trace thirty years ago.

Woof Woof Story: I Told You to Turn Me Into a Pampered Pooch, Not Fenrir!
Translation by Jennifer O’Donnell

After being worked quite literally to death, corporate slave Routa Okami’s dying wish is to be reborn as the well-loved pet of a rich family. When a compassionate goddess actually grants his wish, Routa commits himself to the lazy, carefree, all-you-can-nap lifestyle of a pampered pup-complete with a beautiful owner and all the delicious food he can eat! But as Routa grows…and grows…and grows…he realizes something is terribly wrong. With his enormous body, razor-sharp teeth, and fierce visage, it’s painfully obvious that he was reincarnated not as a dog but as a giant wolf. And not just any wolf-the legendary wolf king Fenrir!

Prologue: “The Deer King – Those Left Behind” by Nahoko Uehashi -「鹿の王 – 生き残った者」
Translation by Jennifer O’Donnell

An unofficial literary translation of “The Deer King”.