I’m a manga letterer and software developer. I tweet a lot about lettering and the localization process, and I post guides and scripts to help other letterers.

You might have seen my lettering work in Sweat and Soap, Fushigi Yugi: Byakko Senki, Waiting for Spring, and a whole host of other series.

How did you get into lettering manga?

I’ve read shojo manga for a long time. Also, in college I was fortunate enough to land an internship with the manga publisher Kodansha Comics in their New York office.

At the end of the internship, they asked me if I wanted to try lettering since I knew how to use Adobe InDesign and Photoshop. I’ve been lettering ever since!

What did you wish you had done differently?

I wish that I’d sought out other letterers much earlier. I’ve learned so much from them, from new techniques to industry acumen. I’ve become better at my job thanks to my lettering buddies, and I can’t thank them enough.

I am amazed by not just your lettering skills but your software for letters! What made you want to combine your programming skills with lettering?

I have a degree in Computer Science and worked as a full-time software developer for over three years before transitioning into my current fulltime-freelance situation.

Once you know how to program, everything looks like a problem that can be solved with programming. There are certain aspects of lettering that can be very tedious, and some of them can be made easier with scripts.

I’ve recently started getting involved in the lettering community and posting the scripts I’d written for myself for others to use. Making my colleagues’ lives easier with my software skills is very fulfilling, and seeing their workflows improve motivates me to write even more scripts.

Likewise, why did you decide to develop your own manga fonts?

I’ve always been curious about how fonts are made. And after you spend some time lettering, you get opinionated on how fonts should and shouldn’t be. I made a font to use in one of the books I was lettering, informed by my years working on manga. It turns out people really, really liked it, and that was the point where I realized that I had a unique voice as a font designer.

Manga lettering is a niche community within a niche community in graphic design. Most of the time, I’m mimicking typesetting that’s already been done for the Japanese release. But many fonts have no suitable equivalent for me to use for the English release. Those are the kinds of fonts that I’m making right now. I can’t tell you what a relief it is to have an exact match for a font you’ve been struggling to find a replacement for for years!

I’m very fortunate to have so many supportive colleagues who encourage me to try new things, and without them I probably wouldn’t have made a single font.

I love working on sound effects! Whether replaced or subtitled, sound effects are the most artistic part of lettering. If they’re done right, they can make a comic sing.

I’m really proud of the lettering tutorials that I’ve been working on. There weren’t any guides that are specific to the kind of graphic design that manga letterers do. It’s the kind of thing I would’ve really benefitted from when I was first starting out.

One of the most time-consuming aspects of lettering is retouching the original Japanese text off of the page. Letterers work very hard to make sure no one notices that we touched the art at all!

If feels like you’re always trying something new. What tools/resources do you use to learn new things and improve your skills?

I learn better by doing something than by studying, so I tend to dive headfirst into whatever I want to do. I’m not saying it’s the most sustainable way to learn a new skill, but no one has stopped me yet!

– The Industry in General –

Everyone who works in localization is a huge fan, too! I think there’s this misconception that the “pro” scene is separate from the “fans”, but the truth couldn’t be more opposite.

The one thing that’s consistent across the projects I’ve worked on is that everyone from the editor, to the translator, to the proofreaders, are all huge fans of the book we’re working on.

Digital simultaneous releases are already big. And I think they’re going to get even bigger as licensing becomes easier and physical releases decline in popularity.

I worry a lot about the viability of surviving off of the wages of being a letterer or translator in the future. (Even now if I’m being honest). Recently a few companies have been revealed to be paying extremely low wages to their freelancers. I hope that publishers and fans alike recognize the immense value of localization freelancers moving forward. And I hope they ask themselves how their actions could be complicit.

I’ve been very fortunate to have been paid fairly and treated well by the publishers I’ve worked with, but I’d be remiss to not use my platform to make up-and-coming letterers’ lives better in any way I can.

You can find Sara Linsley here! 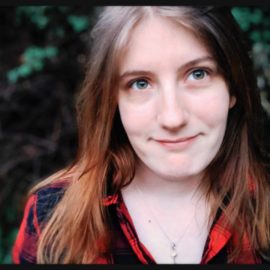