I have been running the website Japanese Talk Online for the last 2+ years to help people learn Japanese. For people to enjoy it as much as I do.

I originally wrote this article on Japanese Talk Online to help those interested in studying Japanese to improve their relations with Japanese clients.

More foreigners are doing business with Japan than ever before. Whether this is interaction with Japanese clients, working directly for a Japanese company, or working as an assistant language teacher in Japan, more and more people are getting involved with Japan. So language is becoming more and more important.

You might not need to learn Japanese for work, but if you’re interacting with Japanese people it’s a good opportunity to learn if you want to. I think wanting to makes a huge impact to studying because it can be something enjoyable, a hobby if you will, rather than a chore.

Many resources for learning business Japanese are written for beginners while assuming you’re also at an advanced level. In other words they will come with phrases written in romaji (the roman alphabet), while also giving you long complicated phrases and conversations to learn. That isn’t useful for beginners no matter what your age or experience is.

This article I’m dividing into two because there is just so much to touch upon! This first one is for professionals wanting to learn business Japanese as beginners, for those who know nothing or very little about the Japanese language.

As time is money and you’re learning business Japanese for the purpose of improving your work, it’s important to focus your study to meet your goals. Which could be both or one of the following:

I touched upon this in the previous post but as a beginner it is imperative that you have a good foundation in the basics. This means hiragana and katakana, and basic grammar and vocabulary.

The best way is to pick up apps and books that will help you learn the basics quickly. I mention later good resources for kanji and grammar but if you want to study basic vocabulary there are lots of resources such as Memrise JLPT N5 Vocabulary and Kanji and Obenkyo (Android). But it’s best to research them and see which one

If you already have the basics down (hiragana & katakana) then it’s time to start focusing on kanji and kanji based vocabulary.

It’s good to get an understanding of the basic kanji because more advanced kanji is made up of basic kanji and often has similar readings. Having a good foundation helps a lot with any advanced Japanese.  (See Japanese Radicals for more information on how kanji makes up other kanji).

It is best to learn kanji as quickly as possible and you can learn up to 1000+ kanji in a year, which is plenty for understanding most vocabulary. 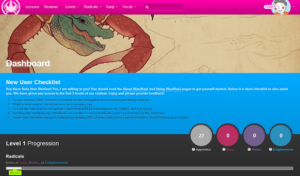 One website that is highly praised for effective kanji learning in a short period is WaniKani, which is a paid ($80 a year or $8 a month). This site focuses on radicals, space memorisation and mnemonics to aid in learning, accompanied by around 6000 kanji based vocabulary and covers the mostly used 2000 kanji.

Other options for studying kanji include the KanjiBox app for iOS, which is a fantastic app that helps you practice writing as well as reading kanji and kanji based vocabulary. (I would buy this if I had an iphone, I think it’s one of the best apps out there for kanji.)

The second most important thing to focus on is grammar. As mentioned a good understanding of basic grammar is essential for understanding the more advanced grammar you find in business documents.

Japanese Talk Online has 2 courses on Memrise (a free flashcard program) which focus on practising basic Japanese grammar (an intermediate level is currently being made):

If you prefer working from books then a fantastic series with great explanations and practice questions are the Try! Learning Japanese from Grammar books. They are aimed at passing the JLPT (Japanese Language Proficiency Test) but are useful even if you don’t plan on taking the tests.

Make a note of vocabulary, kanji and grammar that frequently appears in documents you handle, use them to create your own study materials. You can drill them in a note book, or create your own private flashcard deck on Memrise.com. The more you study and the more you use them at work, the faster you’ll get at understanding the business language for your job.

When learning how to speak Japanese it is still very useful to learn the basic alphabet and kanji as these will open up more options for learning and be useful in general, but you don’t need to focus on kanji if you don’t want to read texts.

In my post on A Simple Way to Start Speaking Japanese I go over the practice of speaking out loud as you’re studying, listening to as much Japanese as you can, and then practice speaking to native Japanese people (resources listed on the post).

But with business Japanese you want to learn useful vocabulary, grammar and phrases for work. Besides useful phrases for visiting Japan (as mentioned in the last post), it is important to learn polite Japanese grammar.

The basic verb forms you learn will be polite “masu” form (see this post for more information on this). The Japanese Talk Online Memrise course Beginners Japanese Grammar I teaches you some verbs in “masu” form followed by their negative, past, and past negatives.

Once you’ve learnt a considerable amount of polite Japanese grammar and gotten used to forming sentences the next thing you want to learn is keigo, or respectful language. This form of Japanese grammar is used most in formal situations such as on business. Keigo can be complicated so I have 3 different articles on it:

The more you practice listening the easier it will be to have a conversation in Japanese. There are lots of books for business Japanese which come with CDs. These will often contain useful phrases for work environments (such as introductions, giving presentations, asking work related questions).

Some of the most useful ones are:

These are also useful even if you’re focusing on reading Japanese texts as the topics covered often come up in emails.

Another good way to practice listening is to listen to business related podcasts, and/or NHK News Podcasts.

Try to parrot things that are said as well as listening to them.

With all of these you might find yourself not understanding anything at all, but the more you study grammar and vocabulary, and practice listening and speaking, the faster you’ll pick up what’s being said.