This is an unofficial translation of the prologue of 【鹿の王 – 生き残った者】 “The Deer King – Survivors” by Nahoko Uehashi.

This is just the synopsis and prologue, both of which are short. I hope to release chapter 1 at some point soon as well. This is such a fantastic story and I really hope it gets published officially in English.

I would love to discuss with the author or an editor about names for places, people, groups etc. Especially  if I were translating the entire story. 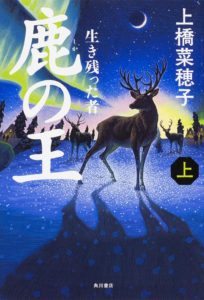 When their homeland is threatened by the Shrou Empire, the Dokkaku, a small band of soldiers willing to sacrifice themselves, rise up. But their leader, Van, is captured and thrown in the salt mines. One night, a pack of dogs attacks the salt mines and a mysterious illness begins to spread. Van escapes in the confusion with an infant child, Yuna, and proceeds to raise her his own.

Fighting against an unprecedented danger in this harsh world, a father an child’s story is about to begin…

Prologue “The Eggs of the Pika Paru”

“Grandfather!” The young boy cried out sorrowfully as he rushed into the room.

A man, clearly past the prime of his life, puts his book down on the desk, “What’s wrong?”

The boy’s face was pained and his breath ragged as he spoke, “I think the Pika Paru have died!”

The man drew back his chair, stood up and went with the boy to the room where the Pika Paru were being kept.

Bright sunlight was flooding into the room from the large window which looked out over the garden. Green seaweed in a giant fish tank danced slowly from side to side from the water flowing in. Bellow the seaweed floated what looked like fallen leaves that had changed color to an ashen gray.

The older man looked into the fish tank and then over to the boy whose lips were trembling.

“I was taking care of them. I was! I changed the water exactly as you told me.”

The man lay his hand on the boy’s shoulder.

“Just calm down and look closer. Here, look at the seaweed, do you notice anything?”

The boy frowned and looked at the seaweed which was framed perfectly by the tank like a picture.

A seemingly infinite number of tiny grains were stuck to the seaweed. The boy’s eyes widened and he looked up at the man.

The man nodded and replied as he looked down into the tank.

“The Pika Paru lay eggs and shortly thereafter, die. Together at once. None survive.”

A shadow fell across the boy’s face.

“…They don’t bring up their children? They just die?”

“These creatures, from the moment they’re born, survive without the support of those that birthed them. But that’s not all. They are exceptional creatures.”

The boy stared into the tank as he thought.

“But why did the Pika Paru die? It seems strange they would die as soon as they laid their eggs. Did the eggs kill them?”

The man tilted his head as he thought about this. “No, not quite.”

Then the man stared at the leaf-like creatures which now floated in silence.

“There was a kind of sickness in their bodies.”

“The Pika Paru are creatures with a sickness lying dormant in their bodies.”

Then older man put a hand on the frail boy’s shoulder and gently squeezed it.

“All living things carry within them the seeds of a dormant illness. If they don’t give up and continue to resist it, they can live. If not, they die.”

@JENTranslations @JENTranslations I think remembering that anyone can make a mistake is really important. I've seen mistakes made by editors, 10-year veteran translators, even by *gasp* the original Japanese writers! Everyone's human and we try to work together to spot these and fix them. https://t.co/SdCOVO8bBG

h J R
@JENTranslations @JENTranslations The Goonies is on Japanese TV and they cut out so many lines and jokes! I guess they thought kids joking about hiding drugs and being sarcastic little asses wasn't appropriate for Japanese audiences.