6 years ago I was in my 7th month of living in Japan, studying at Kansai Gaidai in Osaka. Osaka is over 500 miles from Tohoku yet we still felt the 2011 earthquake and experienced it in our own way.

The following is snippets of my diary from the time of the Tohoku Earthquake. It provides the perspective of a Westerner in Japan who was 500 miles from the disaster. What I went through was nothing compared to those who lost their lives, loved ones and homes. It is merely a perspective of what happened.

It was about 3:00pm on Friday and Brittany and I were in our dorm room doing homework. Brittany had just got up to leave the room when I began feeling dizzy. Which was strange, I thought, because I thought I’d drunk enough water. I then noticed Brittany was hovering at the door, that the room was shaking, and people in the hallway shouted it was an earthquake.

I got up and stayed in the doorway. It was strange because some people could feel everything swaying and others couldn’t. It went on for about a minuet (Brittany had to sit down she was getting so motion sick). I couldn’t tell it had stopped until I saw the cupboard doors had stopped swinging.

I don’t think anyone knew just how bad it was at first. In fact most people were excited they’d experienced their first earthquake (it was my second but I admit I was excited too). So I stuck a message on facebook saying that we’d just had one but everything was fine.

Then I went back to the kitchen and…it wasn’t just us who had had an earthquake.

The news (which was based in Tokyo) was only showing one the news rooms. Footage of the lights in the studio swinging above the camera crew played on repeat. I admit they looked really scared.

It didn’t take long before more information began coming in. A tiny map of Japan on the corner of the screen outlined the tsunami warnings. There was a description of the location and size of the earthquake, and instructions for people to stay calm and to be careful of tsunamis. In about an hour and a half this news was on every channel, warning and advising the population to stay calm and what to do.

They didn’t have any information on how bad it was but still it was pretty impressive at how organised they were, especially at keeping people calm. I certainly felt calm.

So calm in fact, that I felt like it wasn’t that bad. So that night I went to karaoke with friends and we planned to go to the cinema the next day. Although I saw the news in the morning it outlined the missing/dead people to be only at 300. Our conversation on the train to the cinema mainly consisted of how strange it was that this disaster had happened but the sun was shining and people in Osaka were living their lives like normal.

The cinema was packed full of people.

Conversation went back to the earthquake on the way home. My Japanese friend was worried though because she had a job internship just south of Tokyo, and she was really worried that Monday might be her last day seeing us all. I honestly didn’t understand why she was so worried.

Everyone in the UK is freaking out too. I keep getting messages on facebook if I’m safe or not. Apparently the media is showing the whole of Japan destroyed. So I made a made to show just how far Osaka is from the earthquake.

We got a lot more information on Saturday evening and Sunday morning. They showed footage taken by Japanese people as the tsunami came in; taking out fields, houses, cars.

One video was taken by someone on a roof as they watched the river bank break. The wave flowed into the town and crashed against the building they were on. You could see it head towards a few cars driving on the road and then the camera panned away.

All the images were…unbelievable. My mind couldn’t absorb how bad it was. And it was all forgotten when you’re away from the TV, in the world were people are just acting like normal. Although most of our conversation was once again on the earthquake and the seriousness of it all.

My friends and I went to the theater to see another Takarazuka performance. Forgetting all about the earthquake when we were away from the TV.

It’s Monday and I think how bad the situation is has finally sunk in.

At uni today I found out that a few Italian kids are flying back tomorrow because their universities have pulled them out of the program. People are thinking about going home because their families are so worried, and there are rumours of another earthquake in Osaka happening over the next few days.

But if anything happens there’s nothing we can do. We never even thought about the possibility of flying home due to the disaster, but I think even if there was the option I wouldn’t leave Japan. In my head that’s just not a possibility. It’s just something we have to push through.

But just to be on the safe side Brittany and I went shopping and bought food provisions and put them in bags next to the door along with water, jumper, towel and spare shoes. Better safe then sorry.

This evening we were watching the news and they had an English translation of NHK News so we could understand what was going on. The news for the entire day had been about how the nuclear power plant and what’s been going on. But it was mostly more footage of the aftermath and interviews of survivors. It was really heartbreaking.

Tuesday morning. I’m looking at the BBC website again but no new updates. Brittany tells me about some stupid American girl who put a youtube video saying she was glad the earthquake happened because it was god punishing the Japanese for being atheist. Apparently people have also been saying that it’s karma for Pearl Harbor and for the Nanking massacre. Which is just…so…STUPID! People who say such horrible things like that are just ignorant

A few months have passed since the Earthquake and a LOT has happened because of it. It didn’t impact us much in Osaka in terms of damage but it has had a huge impact on the whole of Japan’s society, and I suppose you could say the Uni’s society too.

The week after it happened, the week after I wrote that last blog on the 14th it wasn’t just Italians who left. Every single day more and more people were getting messages that they were being pulled out of the program. First the Italians, and then the French and then most of the Europeans before the Americans started to go too.

The thing was that although we had the news all the time here covering the earthquake, and the missing and death toll rose and rose… What we were all afraid of was getting that email from our universities telling us we were being pulled out.

After the power plant happened the number of Americans who got dragged away was stupidly high. And when I say dragged, I mean dragged. Students were getting blackmailed by their unis to go home. They’d cut their funding, cut their support, take away their insurance etc. It was stupid.

I did get an e-mail from The University of Kent saying that if I did want to go back the insurance company would pay. But I turned them down, explaining why and begging them not to cancel their program. Thank goodness they have a head on their shoulders and were actually listening to us and why we wanted to stay (unlike a lot of American unis). I get the feeling that they told us that just as a precaution so that if anything did happen they could say that they gave us the option.

I think the reasons people weren’t listening to the students out here was because of pressure from insurance companies or from families. Actually one friend of mine, her family were fine with her staying but her uni called her up everyday saying “when is she coming back? It’s not safe.” And harassing her family and making them paranoid until she did go back.

The most frustrating thing was that our area is safe. It is hundreds and hundreds of miles from the disaster, even if the power plants had gone into meltdown, it wouldn’t have been enough to impact us here. But people in foreign countries were seeing just the really bad news and spinning it in a way that made it looked like it was the end of the world, just to sell the news. Even the BBC were making it out to be worse then it was.

I was studying in the library for something and I get a message saying Brittany was going home. She had only found out that morning after telling her parents the situation, and they were so worried her mum booked her a flight on the same day. So she got her things packed and came to uni telling me she was leaving. She said it was a temporary leave but I think in our hearts we knew that wasn’t likely, especially because she didn’t even know when she was coming back, “hopefully before midterms” she said. I tried not to be sad, at least not in front of her, but after she left…

Brittany really did grow to be my best friend out here. Spring break was after that, and then midterms. I kept messaging her and things weren’t clear until a few weeks later. 3 weeks after she’d gone she said she wasn’t coming back. The problem was the nuclear plant, if that was still in the red her family wasn’t going to let her come back.

I just think it’s frustrating how ignorant people can be, and how much the news blows things out of proportion.

Since the incident life in Japan has been pretty normal and Japan has been quickly picking itself up. The news here went from “bad” to “things are looking better”. It began to show people and their stories of what happened to them and their families, to people being evacuated to schools, to the slow implication of necessary foods and water.

The news began to cover a lot more good things about people after the incident who were picking up their lives. It’s not only the news who is staying optimistic though. It’s nice to see that everywhere I go I see Japanese people in groups with boxes for collecting donations for the earthquake victims and people always give them money.

I was in Toyosato the other day for the K-On school again and there was a poster of the K-On girls with “Pray for Japan” t-shirts on. Even anime is supporting the earthquake victims.

A month or so has passed since then and things have gone back to normal. News doesn’t cover what’s been going on much anymore and people aren’t being dragged home, a few even came back! People are still collecting donations, I don’t think that’ll stop for a long time. And apart from missing a lot of my friends who were unexpectedly taken away, things are pretty much just as they always have been.

Getting the Creative Juices Flowing – Translate Like No One’s Watching 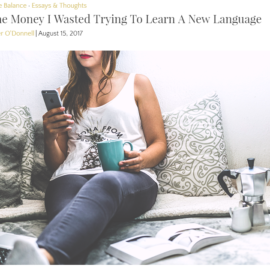